Pattern Painting: Circularity is one of seven watercolors I did exploring the translation of real world objects into formal patterns. This title, like several of the others, is a nod to Joseph V. Canzani, the first president of Columbus College of Art and Design. Canzani not only spoke of circularity, linearity and rectangularity in his design lectures but applied those principles to many aspects of life. Here I reflect on Circularity as cyclical, as a shape, as a form and, through using reflection, as an illusion of space. 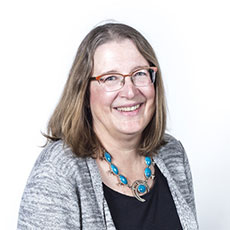 Carol Griffith is originally from Clarion, PA. She received her MFA in painting from Ohio University in Athens Ohio and her BFA in painting from Carnegie-Mellon University in Pittsburgh, PA. She currently resides in Orient, OH with her husband and daughter.Â  Carol Griffith is a Professor at the Columbus College of Art and Design where she has taught drawing, painting, watercolor and theory since 1986. Her paintings, in both oil and watercolor, have been seen in numerous juried and invitational shows. Griffith is a recipient of an Ohio Arts Council Individual Artist’s Fellowship. Her paintings have been recognized with a number of awards including the Best of Show Award in the Ohio State Fair Juried Exhibition and awards from the Huntington 280, Butler Midyear Exhibitions and, most recently, the bronze medal from Watercolor Ohio 2016, 39th Annual Ohio Watercolor Society Exhibition. Her works are included in a number of collections, both corporate and private.