The emotion of a single moment in time is what motivates Michael Guinane to paint.Â  Whether it be aÂ  still and quiet moment of an individual, or capturing the total environment created by multiple figures in one place,Â  his workÂ  allows you to see deeper into the subject.Â  Michael paints to create an atmosphere for the viewer to feel.Â  Whether it be a moment in history or the artist’s personal experience, a quiet winter night in the park or a busy city street, his workÂ  captures the feeling and mood one gets from being in a certain place or time.Â  Much of this can be found in the artist’s view of the city of Columbus and it’s iconic arches.Â  In the same way that people moving through the city will stand out from the city surrounding them, there is still a connection between both the figure and their environment as they become one. 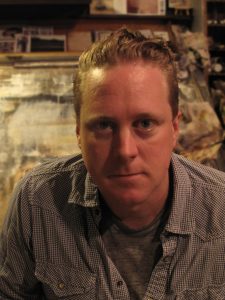 Originally from Milwaukee, Wisconsin, Michael Guinane moved to Columbus in 1996 to attend the Columbus College of Art and Design. He graduated with a bfa majoring in illustration in 2000.Â  Michael continues to live and work in Columbus showing in galleries, public venues and doing privately commissioned works that are shown throughout the country while also teaching courses in painting at the Columbus Cultural Arts Center.Â  He is represented by the Sharon Weiss Gallery in Columbus and the Sharpe Gallery in Maine.